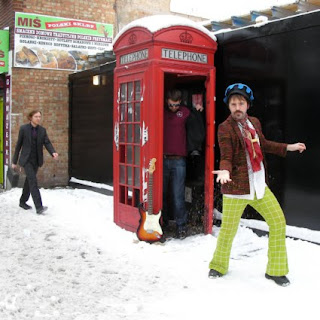 A gentle welcome, dear friend. You may be pleased to learn that we have recorded another EP for that lovely Swedish netlabel, 23 Seconds. It's called Accountants By Day, has eight tracks totalling 21 and a half minutes, and it's fair to say it's a cracker. Some of our best tunes committed to binary. It'll fit on a sleek 3-inch CD (a sleeker but not cheaper option, despite what one witless reviewer assumed), although you may prefer the vanilla option of a full 5-incher (do you not care about clutter?!).

Some thoughts about the recording and mixing process. All of the tracks were written in 2010, well pretty much; "Enlightenment" started as a single phrase a few months earlier but was completed on Sunday 10th January in the dark. It stems from a plan to write a sci-fi themed EP; what better sci-fi to write about than Doctor Who, and what story more suited to songform than Peter Davison's "Enlightenment"? The sci-fi idea is still percolating; expect more in the coming year. It's only a gentle thematic reference; the rest of the lyric a playing-around with amateur astronomical themes. The Sky At Night is a great programme. Can't believe I didn't latch on sooner. The last bit recorded was Luke's flute solo, with its triple trill finale.

We shoot forward to a transitional piece, "All I Never Wanted". We reckoned a little mood-shifter was necessary, and Bob's zither and cymbals did the rest. I think a collection of library music would be a good diversion for us, freed of the tyranny of lyrical narrative. You may beg to differ. Our long-suffering mixing program, Jeskola's Buzz (why am I writing that? It's the mixer, i.e. me, who suffers, bent-backed at the desk for hours trying to alchemise whilst everyone sleeps off their curry... woe, woe, woe) ...features a fabulous reverb plugin, Sonic Verb, crafted to resemble a pricey reverb of the early 00s, and which features on all the tracks on the EP. Here it's cranked up. I love the shiver-down-the-spine of the zither. Not sure if we can replicate it now Bob's bought a tuning key.

Have you ever hated your boss? Ah, but have you ever committed those thoughts to wax? Nor have we, but we did use our new-ish Korg D888 digital multitracker on this collection, and one of its first wriggling specimens was Bob's "Below The Waves" (Song For A Bastard Boss). A bluesy belch of bile, its instrumental break sees several badly-played quiet guitars going through a dozen effects boxes. I'm enjoying playing slide guitar these days. But oh! the luxury of recording the basic band track in the same room at the same time, with multiple mics on the drums.

Sex tourism is go! "Abysinnia Next Week" began life as another song of Bob's called "White Darth Vader"; I picked out the underlying filth in its semi-nonsense lyrics and added some suitable lines. (The original synthpop version is still to come, on another EP, someday...) The backing track was mostly recorded in Exmouth at Luke's mum's house, where there is a great selection of recorders. Freak, man!

After all that rampancy, you need a comedown, and here we have "Fly By Night". It has something to do with being persuaded to volunteer at an adults' charity ball, and having a miserable time. Rigsby comes to mind: "The permissive society? It doesn't exist. And I should know - I've looked for it". But of course, it needs to be looking for you. Listen out for a fierce and wonky guitar solo (ha!) and a fierce and wonky melodica (double ha!). This was the last thing recorded for the EP - we kept it standing around in the corner until December wearing only a simile.

"Wafternoon" also hung around for a little while, until its silly lyric had infused through the music properly. It was prompted by a wobbly moment on the south coast. The middle section features two kazoos (never underestimate the kazoo), woozy slide from Luke and a kitschy keyboard solo by myself.

It's reverb to 11 on the penultimate track, a riot of stereo percussion which includes coins spun on drum heads, a wind-up plastic robot, a wooden metronome, wall chimes, and a metal Beatles wall sign struck like a gong. It's named in honour of the daft comedian Marty Feldman, and nearly had the suffix "Emergency Ambulance". Imagine a fierce storm in an English village, trees coming down in people's gardens, slates sliding off roofs, and Marty riding through the sheeting rain, perhaps wiping the windscreen with a hanky when the wipers get stuck.

We end the EP in solemn territory. Having first heard it after perusing Elena Filatova's Chernobyl photos, "Son of a Systems Engineer Manager" conveys such an air of weary resignation, that it's quite possible to believe Luke went and sabotaged a power station the following day. The protagonist's hopes are allowed to pick up briefly in the psychedelic middle 8, before coming back to the present with a distorted klaxon (having dozed off on the night shift?). You may be amused to note the rumblings over the final minute are provided by my washing machine, which just happened to go onto its spin cycle at the right moment. Who needs BBC Sound Effects CDs?
Posted by keshcologist at 1:33 am No comments: