These two are on sale from this Saturday, 27th September, as part of the second international Cassette Store Day: 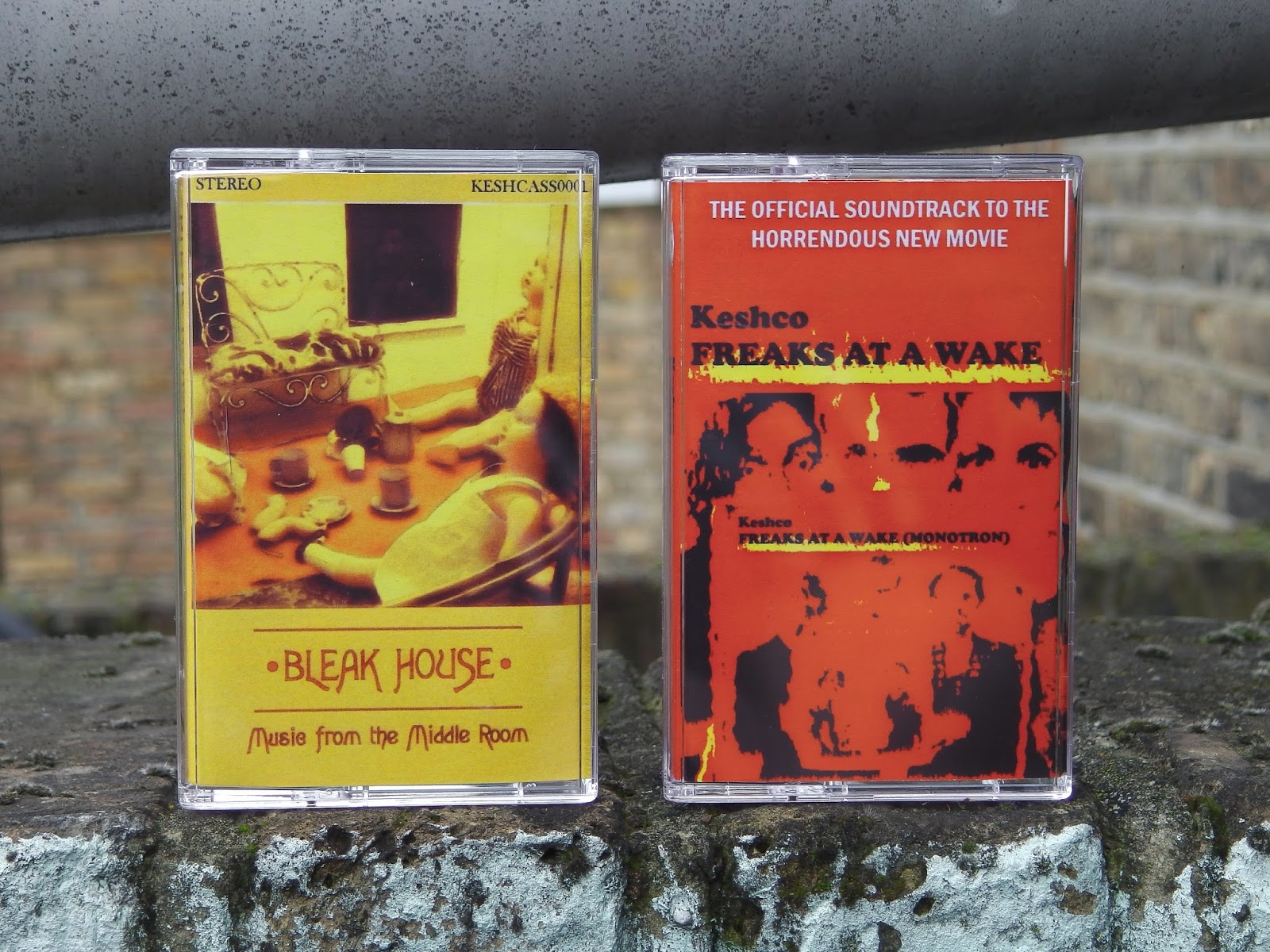 These releases (on the Keshcology label) are available from several retail outlets including Pebble Records (Eastbourne, England), The Inkwell (York, England), VOD Music (Mold, Wales), Insula Music (Copenhagen, Denmark), Burger Records (Fullerton, US). Why not ask Rough Trade if they're getting any independent music in?
Posted by Andy Brain at 10:54 am No comments:

Email ThisBlogThis!Share to TwitterShare to FacebookShare to Pinterest
Labels: 2014, cassettes

The dream shall never die


Well that was frustrating news to wake up to. So close. All over Scotland, more than 4 out of 10 wanted independence - if this was a jury, it'd necessitate a re-trial.

Despite the high (for apathetic UK anyway) voting turnout of 84%, I suspect that, as with so many campaigns, too many yes supporters couldn't be bothered enough to vote, leading to the eventual 55%/45% split. Voter registration was 97%, so that's 13% who didn't get it together to have their say. Much better than the baffling failure of the AV referendum, but remember - Tories will always turn out to vote, so you can't leave anything to chance.

Still, it was a pretty close result and by no means could Westminster be satisfied with the margin. The no vote was generally in spite of Westminster, more a vote of fear of the unknown. You note how this morning Cameron slipped into his speech "settled for a generation, perhaps for a lifetime" - really? Really? Presuming there's another vote in another 15-odd years time, the younger yes will surely outstrip the older no.

A good summing-up of the new challenge was made by Phillip Blond from ResPublica (some kind of think-tank). The two options on offer - an increase in Scottish devolution and the ruddy West Lothian question - are contradictory impulses - MPs are kept in line by party whips, so banning the Scots ones from English issues and vice versa merely serves to tighten the grip of Westminster. Better just to devolve everywhere, and energise the whole nation - the Cornish, the Welsh, the North-East, Manchester, Liverpool, the Midlands et al; even the sodden Fens; and in the process the West Lothian nonsense will dissolve because we'll all take more responsibility at a local level.

On the night, it was fun to see McGlashan again, caricature though he is. Catch up with his previous adventures in the cackle-tastic and surprisingly sprightly Absolutely Everything DVD box set (via Amazon UK or Amazon US).

Posted by Andy Brain at 7:56 pm No comments:

With Cassette Store Day coming up on September 27th in several countries around the world, I'm amused to tell you that we've already taken more orders for our two cassette releases than we have for the Now CD project, presumably because the tapes were professionally duplicated and our releases are included on the official cassette store stock list. If you want a copy of "Freaks At A Wake", in particular, you'd best be quick. "Music From The Middle Room" is a larger run, so you can be quick for a longer period. After the day, any unsold stock will go up on our Bandcamp site.

Happily, I've printed the sleeves/labels myself too and they don't let the side down.

The Avery template for cassette labels (7655) does not work properly on Word 2010 (there is an irremovable blank area at the top of the first row), so I had to make my own.

Yes, tapes are nice, but not a kigo in sight. And have a haiku couplet:

I like haiku, more than it likes me. It's a fine length for ADD.
Posted by Andy Brain at 11:59 am No comments:

Five bands who have influenced us

The question of influences is particularly thorny in this band, particularly for those listeners who (believe they) like their bands to stick to the same style. We tend to confuse the majority. If Depeche Mode are on our list, then you can be sure the DM fan will hear a folk song and switch off. If Billy Bragg is on our list, then by God the first song had better be a solo electric guitar and bald lyrics about the miners, or they'll switch off. If the Bonzos are on our list, the Doo-Dah fan will find two songs in a row that aren't humorous, and then switch off. Et cetera. It's like the ZX Spectrum tunnel-visioners who follow our Twitter feed when we mention the computer, only to run away as soon as we mention anything not computer-related. I like to think of this process as sifting through the general mass of people to find only the really free and open ones (and congratulations on your excessively eclectic taste if you do consider yourself a fan of ours), but how can you tell when people are so quiet? And which influences really are the most important?

Over the years, our conception of who we want to sound like, and who we actually sound like, has mutated constantly. I'm going to list five of the bands who I think make good lines of fit across the scatterplot of Kesh.

The Cure
Here's a band who started off down a particular lo-fi path and, as their tastes and ability broadened, so the music went through a series of Wild Mood Swings, not only the happysad that encompasses the rushing highs and crushing lows, but a teetering between sunny anthropomorphic fantasy and harsh hooded-wept reality, and a gamut of instrumental styles, about the only unifying features being heavy use of chorus/delay pedals, and Robert Smith's vocals, which themselves skitter between anguished howls and playful hoop-las. They were a big influence on our live goth-pop sound circa 2000. It seems since around that time they've reined in and settled into a downbeat rockier mode. I get a little sad at the contempt Robert Smith seems to have for some of his own pop tunes, as if he feels he has to write stupid in order to get a chart hit - whilst many bands know that feeling, it doesn't make the songs pointless - you have to just try and get better at making what you want to play and say become irresistible to the masses. Of course if someone sings an upbeat song with contempt, what are the audience supposed to feel? We've felt this on stage when performing certain songs that have lost their lustre for us - better to sing a sad song with relish than an obligatory happy number.

Sparks
Super chamber-pop duo Russell Mael (the one with the mass of curly hair) and Ron Mael (the one with the moustache) have spent 40 years searing through styles (glam, disco, indie dance) and often left their fans trailing behind, a major upswing in their fortunes coinciding with 2002's Li'l Beethoven, which instead of beats features masses of vocals keeping up the rhythm. Their live setup with its sampled beats and comedy moments was inspiring to us when looking for ways of performing 2-man gigs around 2004/5. Their waspish wit and effervescent melodies are always something to aspire towards.

Stereo Total
The live inspiration around that time also came from Stereo Total (e.g. the Musique Automatique album), although whilst Sparks are precise, Stereo Total value the happy accidents of scuffed chords, malfunctioning electronics and strained vocal leaps. The duo of Francoise Cactus and Brezel Goring play high-tempo garage-electro-rockabilly-chanson-punk with playful lyrics in several languages, which lead to their own happy lyrical accidents. Watching the obvious fun they were having reminded us that music made fast can have a great compulsive energy.

Os Mutantes
This choice perhaps says more about where we are headed; but the free and easy collaged sounds of Os Mutantes (the Brazilian Beatles?) have excited and subliminally influenced us for many years, their homemade guitar pedals distinctly pushing us towards the circuit-bent route, and I note how they keep their scathing satires uptempo and fun, with those fresh bossa nova chords and infectious melodies. Make 'em dance, make 'em think, make 'em resist. I can only imagine how much better it might sound if I understood Portuguese rather than relying on translations.

Duran Duran
Seriously, work with me on this. Four or five immensely fashionable young men with a line in innovative electronics, sci-fi dystopian lyrics, great rhythms... catalogue model good looks, champagne lifestyle... vocals that crack during important gigs... a couple of people leave and we get our own Nile Rodgers super-counter-melodist to compensate... a name taken from Barbarella (now you're just making it up. Ed). Oh have it your own way.

Along the information superhighway we trundle. Today I have some favicons for you. Favicons are the little icons you see at the top of your web program, in the tab next to the title. Here's our new www.keshco.co.uk favicon:

On the old version of the Kesh site, it was this:

Which do you prefer? Is it wrong to focus on the trolley symbol; will it further confuse music seekers?

With luck you can see the one at the top of this blog, which makes our purpose a bit clearer:

Would you like to design us an alternative one for Sunday best? (We'll pay in muesli.) Or, would you like us to design one for you? Yes, your site can have one too, perhaps created at www.favicon.cc.

The new Bleak House site - www.bleakhouse.eu - has a favicon, too:

What are your favourite favicons? To me they bring back the fun of the Shoot-Em-Up Construction Kit (where the resulting game was pretty fixed and samey, but the great excitement came in the sprite design), or before that the Character Generator program on Horizons, the ZX Spectrum introductory cassette. Small is beautiful, working within restriction to create an impression of something with the minimum of signifiers.

Talking of small, beautiful things creating an impression of something, let's take a radical left turn, with a guest poet. Old Keshcologist Andrew Walton from Clydebank has two neat collections of poetry: Little Red Poetry and, most recently, Little Green Poetry. He recorded an episode of Poetry Hallway for our uStream channel in Autumn 2013. Here is one of his current political verses, which I like a lot.

Like the last dregs
In a once-proud steel can,
Our other national drink
Now lies crumpled

Beside  a torn up
Slip. A frustrated bet
On a winded nag which failed to
Deliver. A ballot

Thrown on the ground
To the skirl of pipes.
A cross beside “YES”,
A faded pencil saltire.

A broken outpost, aside from the battle
Where Sheridan tours,
Denounces the rule of capital
In stentorian tones.

Words echo around halls from
Alloa to Inverness.
They cannot carry
To far-off Northamptonshire.

Notes: Tens of thousands of workers from Scotland came to Corby, Northamptonshire in the 1930s and 1960s, on the promise of jobs in the steel industry. Thatcher destroyed much of the manufacturing industry in Britain, and British Steel was privatised – the jobs have long-gone. The town recently had a mock-referendum on Scottish Independence during the town’s Highland Gathering. Unlike the Yes campaign in Scotland, which is gathering momentum, the town voted No. Might this reflect a general mood of bitterness, anger and resignation to fate?
Posted by Andy Brain at 11:29 am No comments: