With Keshco having returned to the tangible delights of cassette releases in 2018 (find "Never Eject" here), we put the band members in the spotlight to answer a tape-themed series of questions. This time, it's housewives' favourite, Luke Sample, genius composer and gentle crooner of such hits as "For The Living Dead" and "Son Of A Systems Engineer Manager".


* What are your earliest cassette-related memories?


My parents had a mix of vinyl and cassettes in their collection.  Most of the tapes I initially remember were either Irish Folk or classical music although during the mid-late 80s I do recall 'Graceland' and Fairground Attraction getting heavy rotation.  When I turned 6 or 7 I received three tapes that proved incredibly influential in determining my first musical tastes.  They were:
The Beach Boys - 'Endless Summer'
Eddie Cochran - 'The Very Best Of'
The Drifters - 'Greatest Hits'

I absolutely loved each and played them over and over again on a beat up single tape stereo in my bedroom.

I remember one holiday car trip where one of my headphones broke while listening to the Beach Boys tape.  All of a sudden I had 'Don’t Worry Baby' playing with no lead vocal and just the harmonies ringing out.  That blew my mind.  The Eddie Cochran tape was used for a particularly memorable school performance of 'Summer Time Blues', but of them all, The Drifters tape was probably my favourite.   There were about 20 or so three minute pop classics, the one standout being a cover version of 'Sweet Caroline'.  I've never been able to find that version on any other format so will treasure that tape for as long as I can.


Between the age of 7 to 24 I made hundreds of mix tapes.  These ranged from my own best ofs to gifts for friends, family, love interests and girlfriends.  Many had themes, with perhaps the most morose being a plane-crash tape I made for myself prior to travelling to America and New Zealand.  This basically consisted of all my favourite tracks so that should we have to make an emergency landing I could be sure that I'd be listening to a great song on the descent.

* Do you have a favourite tape in terms of the artwork/packaging?


I don't really recall having any particular favourite.  I remember buying The Bluetones 'Expecting to Fly' because I liked the cardboard peacock artwork, but mainly because they cannily decided to sell it for only £4 to entice young whippersnappers like myself.  It worked.  I love that band, and that particular cassette.

* Are there any bands in your collection that you only owned on tape?


There are some where I've never bought the album on another format.  The aforementioned 'Expecting to Fly', Green Day's 'Dookie', Huey Lewis & The News' 'Fore' and several Simon & Garfunkel albums.

* What's the oddest tape in your collection?


I remember in 1988 I went to WH Smiths in Exmouth town centre to buy Michael Jackson's 'Bad' on tape.  When faced with the top 20 shelf, however, I inexplicably decided to buy a re-issued cassette of Bryan Ferry's 'Let's Stick Together' album.  I think the eponymous single had been in the charts that year, but I still can't fathom what made me do that.

* Tell us something about [the making of/the story behind] your favourite track/s on the new album?


I really liked the concept of bringing little bits of Keshco past and present into one release and Andy had great intuition of what should be included and the new bits and pieces we could bring in.  I do really like 'The Fens' and 'The Fens Jig', which consist of one of our heaviest guitar instrumentals married with a brilliant folk rendition.

* You play several instruments in the band. Which do you prefer and why?
I really like all of them actually, although some do drift in and out of favour.  I have a special fondness for heavily delayed electric guitar, and while I do protest about my basic flute playing I do secretly like giving it a go with some extra reverb and double-tracking. 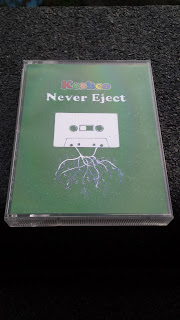 With Keshco having returned to the cassette format for their latest release, the 62-minute mixtape "Never Eject" released in time for Cassette Store Day 2018, here is the first of a series of short tape-themed Q&As. First up, it's the composer of piano psychedelia "Misguided" and synthpop classic "White Darth Vaydar", amongst many others. Step forward...


What's your strongest tape memory? Growing up apart from my brothers and sister, visiting them, and listening to "Wish You Were Here", I remember vividly looking out of the car window and thinking "my family's in that house, I bet they're having more fun than me". My brother gave me those very same Floyd tapes just over a year ago.

What was the first tape you purchased? I can't quite remember, but I do remember asking a member of library staff to unlock their tape carousel so I could hire Freddie Mercury's "Mr Bad Guy".

Did you make mix tapes? I did, although I labelled 'em "Compilations". They were mostly Queen "Deep Cuts" and radio interviews. I made covers using Queen bits I'd find in Smash Hits magazines. The rest of my tapes were my vinyl singles (including... the b-sides) finally on tape.

Bob is also responsible for the accompanying wooden tape art objects, under his arty guise of Bob Art Models. Stalk him at the Louder Than Words literary festival in Manchester this November.
Posted by Andy Brain at 9:52 pm No comments: